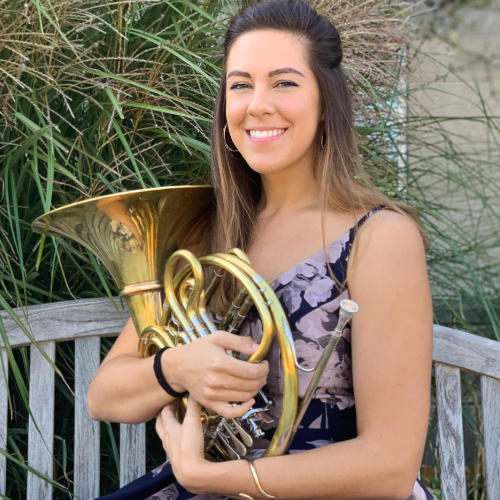 Sara Petokas is a Doctoral Candidate at Indiana University studying under Jeff Nelsen (Canadian Brass). She is currently the adjunct Professor of Horn at Marian University in Indianapolis, Indiana.

Originally from Tunkhannock, Pennsylvania, Sara attended and received a Bachelors in Music Education from Mansfield University. While at Mansfield University, Sara performed Morceau de Concert by Camille Saint-Saëns with the Mansfield Symphony Orchestra in 2014 as winner of the Concerto Competition.

Sara completed her Masters in Music Performance and Literature at the Eastman School of music in 2017, studying under the Professor Peter Kurau. While at Eastman, Sara was the TA of the Eastman Horn Studio and Natural Horn Studio. in addition, Sara was also the TA for the Horn Methods Course in the Music Education Department and taught Secondary horn lessons. As an intern for the Eastman Community Music School in 2015-2017, she maintained a large studio and taught private lessons to students of all ages.

Sara plays regularly with The Flower City Brass, a quintet founded at Eastman in 2017. The quintet has performed around the world, most recently invited to compete at the Philip Jones Brass Ensemble Competition in July 2019. In the summer of 2018 they appeared in Leksand, Sweden, in conjunction with the Stockholm Chamber Brass. In the Summer of 2017, the quintet performed in Höff, Germany, invited as a fellowship quintet to a festival with the Rekkenze Brass. In February 2018, the quintet performed as featured soloists with the Eastman Wind Ensemble; a composition for Brass quintet and Wind Ensemble, “New York City Scapes,” by Jeff Tyzik.

in the Performing Ensembles Division Library. She has performed a vast repertoire of Baroque and Classical pieces on period instruments. Most notably she performed with the Indiana University Baroque Orchestra on Handel’s Parnasso in Festa in February 2019. Throughout her career, Sara has studied with notable performers such as William Vermeulen, Roger Kaza, Denise Tryon, and William Purvis.