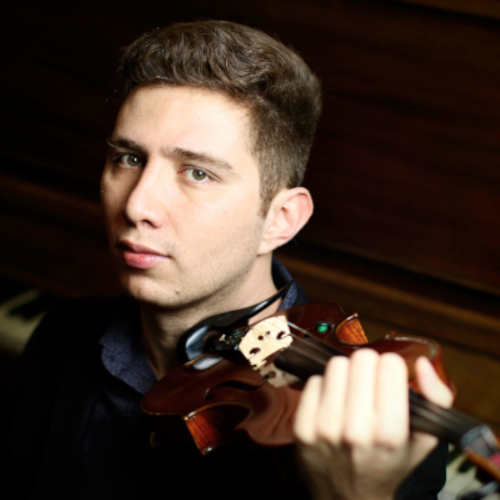 I was a winner and only representative from Venezuela at the YouTube Symphony Orchestra 2011, which had it’s live broadcast from the Sydney Opera House and it’s the most viewed online concert to date, gathering 33+ million viewers.

Born in Merida, Venezuela, I started the violin at the age of 7 in the System of Venezuelan Youth Orchestras, where later on I was appointed concertmaster, violin teacher, sectional leader and guest conductor, receiving violin conducting and pedagogy lessons at the same time. During my formation as a violinist, he received lessons from acclaimed violinists such as: Maurice Hasson, Virginie Robilliard, Alexis Cardenas, Philip Setzer, David Geber, Daniel Phillips, Dmitri Berlinski, Alex Kerr, Giora Schmidt y Kazuhiro Takagi.

As composer, the Classical Music Institute comissioned me a work for two violins, viola, cello, bass and guitar titled Tema y Consecuencia and was premiered at the CMI summer program in San Antonio in June 2018. My composition titled Serenade for Strings: A Ludwig Souvenir was premiered on February 2020 by the CMI to honor Beethoven’s 250th anniversary.

I’m sharing violin tutorials and performances on my YouTube channel for the online community, and my project MangataM, which aims for content creation, original music and audiovisual production in YouTube and Instagram, has 3 of his compositions premiered online as well.

I’m the first violinist graduated from the Universidad de los Andes in Venezuela, and also hold a Master’s degree in Violin Performance from the Pennsylvania State University. Currently I’m a violinist and education advisor at the Classical Music Institute in San Antonio, TX.