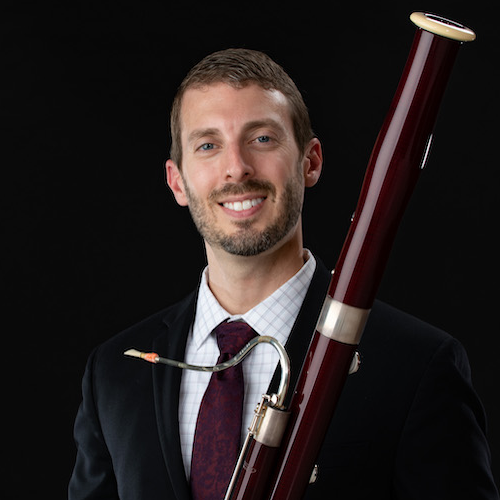 Dr. Nathan Koch is the Assistant Professor of Bassoon and Music Theory at the University of Nebraska-Lincoln and the newest member of the resident faculty woodwind quintet, the Moran Quintet. Previously he served as the Associate Professor of Bassoon on the faculty of Sam Houston State University while maintaining an active freelancing career in Houston and around the state of Texas, including regular performances with the Houston Grand Opera Orchestra, the River Oaks Chamber Orchestra, the Austin Symphony, the Austin Lyric Opera, the Brazos Valley Symphony Orchestra, and the Victoria Bach Festival.

In demand as a clinician and soloist, Dr. Koch has presented and performed at the conferences of the Texas Music Educators Association, the Texas Bandmasters Association, and the International Double Reed Society, most recently in Granada, Spain and Tampa, Florida. He has served as a recurring adjudicator for the Texas State Solo and Ensemble Competition, as a regional audition proctor for the prestigious National Repertory Orchestra summer festival, and as a section coach for the Omaha Area Youth Orchestra.

Also an avid arranger and transcriber, Dr. Koch has several solo and chamber works published by TrevCo Music, the leading publisher of double reed literature in the country. His projects have been performed at the Vianden International Chamber Music Festival in Luxembourg by Christin Schillinger and recorded on the Longhorn Music Label by Kristin Wolfe Jensen. A recent solo IDRS conference recital featured Dr. Koch performing his own transcription of Franck’s Violin Sonata in its entirety, and the work is now published through TrevCo.

Dr. Koch earned his DMA and MM degrees from The University of Texas at Austin under the guidance of Kristin Wolfe Jensen, and a BM from Wichita State University with Nicolasa Kuster.