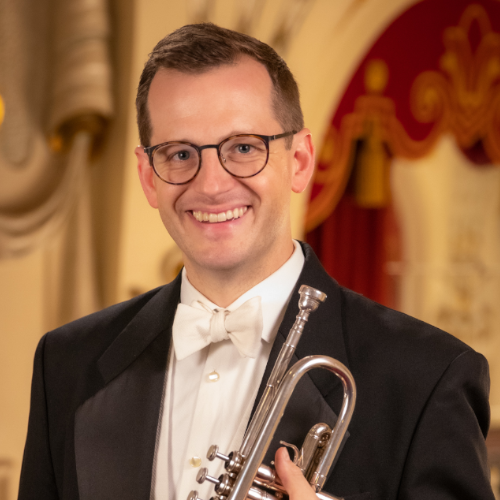 Wilkinson is a wizard, the peer in technical skill and beautiful sound of the greatest trumpet virtuosos of the past. – San Diego Union-Tribune If the trumpet part (of Mahler’s 5th Symphony) can be played better than by the PSO’s principal, Micah Wilkinson, I would like to hear it. – The New Criterion Micah Wilkinson has enjoyed a varied career as an orchestral musician, soloist, chamber artist, and teacher. He was appointed Principal Trumpet of the Pittsburgh Symphony Orchestra by Manfred Honeck in September 2017. Wilkinson came to the Pittsburgh Symphony from the San Diego Symphony, where he served as Principal Trumpet for three years. He previously held positions with the Houston Symphony, the San Francisco Symphony, the Oregon Symphony, and the Tucson Symphony. He performed recently in subscription programs as Guest Principal Trumpet with the Chicago Symphony Orchestra, the New York Philharmonic, and the Seoul Philharmonic. Professional summer festival appearances have included the Aspen Music Festival, Chautauqua Institute, Sun Valley Festival, Cabrillo Festival, Brevard Music Center, and Astoria Music Festival, where he was a soloist in Bach’s Brandenburg Concerto No. 2. He performed to rave reviews as a featured soloist with the San Diego Symphony, recognized for his “complete confidence and refreshing catalogue of contrasting colors” (San Diego Story).

He is an accomplished teacher, clinician, and chamber music coach. In the summers, he has taught at the Aspen Music Festival and Round Top Festival Hill Institute in Round Top, TX. He also has served on the faculties of the University of Houston and Portland State University, and has presented master classes all over the world. Wilkinson grew up in Norcross, Georgia. A proud graduate of St. Olaf College in Northfield, MN, he pursued additional studies at Arizona State University and the Staatliche Hochschule für Musik in Freiburg, Germany. His primary teachers include Martin Hodel, David Hickman, Larry Black, and Anthony Plog. He lives in the South Hills of Pittsburgh with his wife Stefani, a professional oboist; their beautiful daughters Eleanor and Amelia; and their goofy Basset Hound Barber.