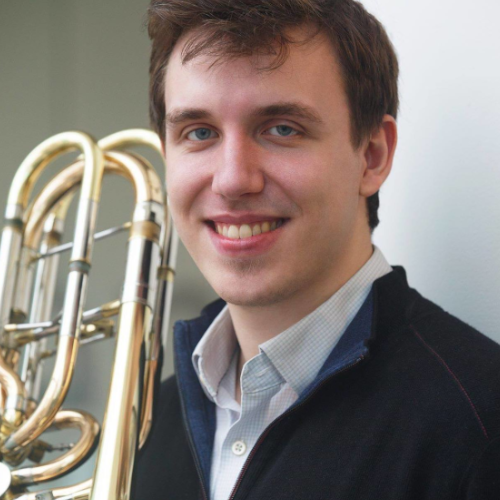 Matthew Winter is currently the solo bass trombonist of the Finnish Radio Symphony Orchestra. A position he won while pursuing his bachelors degree at the Juilliard School. Previously Mr. Winter was also a member of the Verbier Festival Orchestra for two summers.

In addition to this he has performed with distinguished ensembles such as the Metropolitan Opera Orchestra, and the New York City Ballet Orchestra. He has worked with great conductors such as Valery Gergiev, Paavo Jarvi, David Zinman, Manfred Honeck, Alan Gilbert, Michael Thilson Thomas, Ivan Fischer, and Gianandrea Noseda.

When Mr. Winter is not playing trombone he enjoys composing and playing the piano. His trombone quartet “ildiko” was premiered at the Juilliard School in 2014 for the non-major composition competition and was selected to be performed in Alice Tully Hall. This work was also premiered in Spain in the summer of 2015 and recently in Finland and Estonia.

I use Zoom, Google Hangouts, or Face-Time to conduct our lessons.