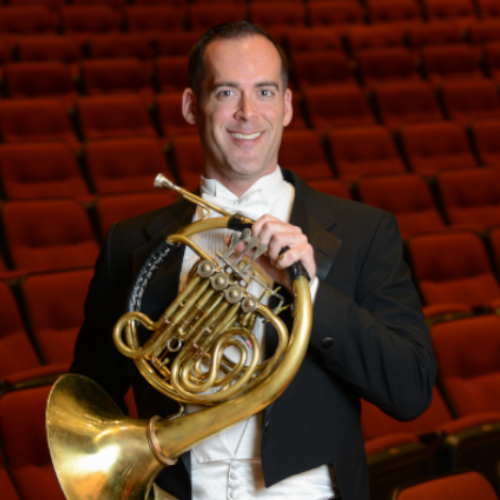 Jeremiah Frederick, horn, holds the positions of Associate Principal Horn of the South Bend Symphony and Second horn of the Lake Forest Symphony and plays regularly with the IRIS Orchestra in Memphis. In addition, Jeremiah has played with many Chicago-area ensembles including the Civic Orchestra of Chicago, Chicago Philharmonic, the Grant Park, Elgin, and Rockford Symphonies, the Joffrey Ballet and Lyric Opera of Chicago. An avid chamber musician, he is a member of the award-winning Quintet Attacca. In August of 2001, Jeremiah was awarded third place in the American Horn Competition. Solo engagements have included performances with the Fort Wayne Philharmonic, the Fox Valley Symphony in Appleton, WI and the South Bend Symphony. Jeremiah graduated from Northwestern University in 2000 with a Masters’ Degree in performance and received his BM from Lawrence University. His teachers have included Gail Williams, Bill Barnewitz, and James DeCorsey. He currently teaches at the Music Institute of Chicago and maintains a large private studio. Jeremiah enjoys teaching all ages and loves instilling the joys of the horn with his students!