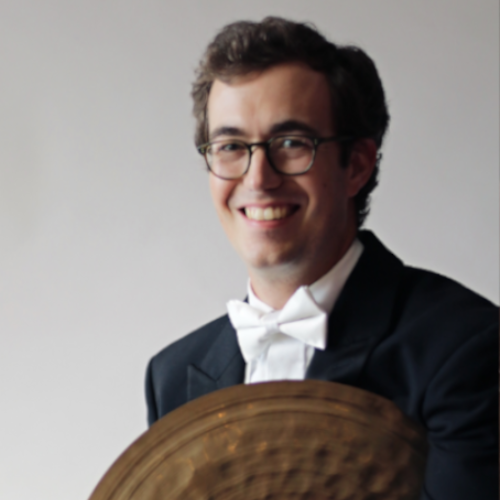 James (Jay) Ritchie joined the Detroit Symphony Orchestra in 2016 as Assistant Principal Timpanist and Section Percussionist. In 2019, he was featured as soloist with the DSO in Philip Glass’ Concerto Fantasy for Two Timpanists and Orchestra along with DSO colleague Jeremy Epp. Prior to his DSO appointment, Jay was a regular extra with the Cleveland Orchestra, Principal Timpanist of the Blossom Festival Orchestra and performed frequently with other groups in the Cleveland area. Jay has also appeared with the National Symphony Orchestra, the Minnesota Orchestra, Ottawa’s National Arts Centre Orchestra, the Malaysian Philharmonic and the Buffalo Philharmonic.

Jay spends his summers performing at a variety of festivals—most recently the Sun Valley Music Festival. Previously, he was Principal Timpanist with the National Repertory Orchestra, and has also appeared at the Tanglewood Music Center, the Pacific Music Festival, and the Britten-Pears Orchestra.

An active educator, Jay maintains a private teaching studio in Detroit, and also works often with percussionists in the DSO’s Civic Youth Ensembles. He is an endorser and clinician for Freer Percussion and Remo, and has given masterclasses at major conservatories and universities throughout the US.

A native of Blacksburg, Virginia, Jay began studying piano at age 8 and percussion at age 11. He received his Bachelor of Music from Manhattan School of Music, where he studied with Duncan Patton, Chris Lamb, and She-e Wu, and completed his Master of Music at the Cleveland Institute of Music as a student of Paul Yancich and Marc Damoulakis.