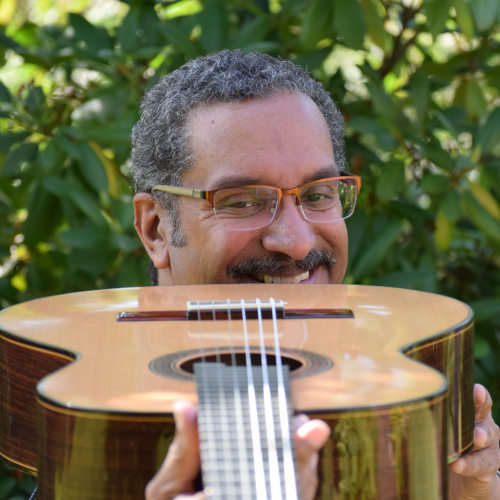 Gerry Saulter is a renowned Alhambra Guitars Performing Artist, Centaur Recording Artist, and guitarist/founding member of the award-winning flute and guitar ensemble, Serenade Duo. Mr. Saulter is an endorsed artist with Fishman Music and is also recognized as a Royal Classic Strings Artist, playing RC Strings exclusively on all of his instruments.

Gerry Saulter is presently an Applied Instructor of Classical Guitar at Suffolk County Community College. In addition, he is the Guitar Lead Teacher at Usdan Summer Camp for the Arts. Professor Saulter served as the Deputy Director of the Music Division, as well as the Director of Applied Music at Five Towns College, New York for over twenty years. Professor Saulter was also the Founder/Artistic Director of the Annual Fall Festival of Guitar at Five Towns College. As a result of his dedication to higher learning, Mr. Saulter was inducted into the teacher’s National Honor Society, Phi Sigma Eta. Mr. Saulter is currently a member of the Guitar Foundation of America and has been published in the organization’s magazine, Soundboard. In addition, he was a contributing writer for 20th Century Guitar Magazine with a monthly column entitled The Classical Corner.

Gerry Saulter holds a Masters of Music Degree in Performance from Five Towns College, as well as a Bachelor of Arts Degree in Music Performance from the State University of New York at Stony Brook and an Associates Degree from Nassau College. www.serenadeduo.com