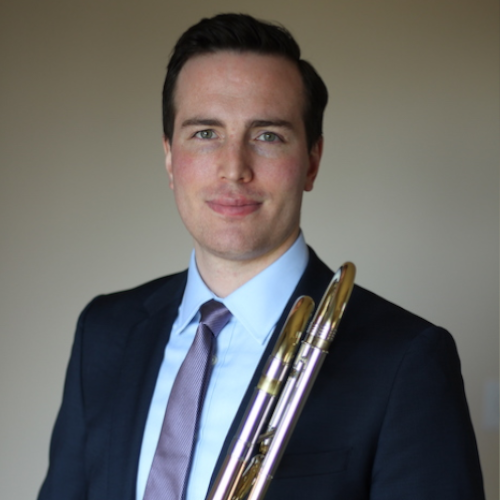 David Binder joined the Detroit Symphony Orchestra as Second Trombone in September 2015. He previously served as Co-Principal Trombone of the Finnish National Opera in Helsinki, Finland for three seasons. He has also performed with the Chicago Symphony Orchestra, the Grand Teton Music Festival, the Detroit Chamber Winds and Strings, Music of the Baroque (Chicago), the Finnish Radio Symphony Orchestra, and the Tapiola (Finland) Sinfonietta. As a soloist, David has performed recitals in Finland, Switzerland, and across the US; and has won solo competitions at the American Trombone Workshop, International Trombone Festival, and International Women’s Brass Conference.

David can be heard on the DSO’s Grammy nominated recordings of the Brahms Symphonies and the Tapiola Sinfonietta’s critically acclaimed recording of Stravinsky’s Pulcinella Suite.

A Chicago native, he completed his Bachelor’s degree with Brass Department Honors at Northwestern University, studying with Michael Mulcahy, Peter Ellefson, Timothy Higgins, and Randall Hawes. While at Northwestern, he was also a regular member of the Civic Orchestra of Chicago and studied additionally with Jay Friedman. During his time in Europe, David travelled extensively to study with prominent trombonists on the continent, including Ian Bousfield and Jamie Williams.

David has quickly become sought after as a pedagogue. He has presented masterclasses at Northwestern University, Indiana University, University of Michigan, Michigan State University, and Western Michigan University. In Detroit he maintains a private studio and is heavily involved in the DSO Civic Youth Ensembles program, leading rehearsals and sectionals for low brass students.

I use Zoom, Google Meets, Skype, or Facetime to conduct our lessons.

I accept PayPal, Zelle, & Venmo. Message me for more details.