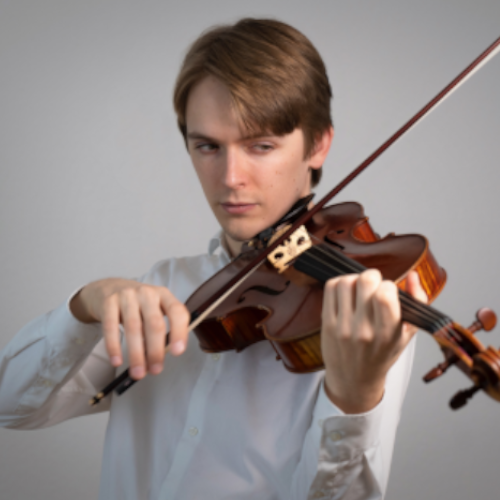 Benjamin Beck is an award-winning violist from France. The international press describes his playing: “… a musician with a generous and profound sound, powerfully embedding so much warmth and roundness…”.

Previously, Benjamin served as solo viola at Bayerisches Staatsorchester and played at Berlin Philharmonic as a scholarship holder of Karajan Academy. He played under the baton of the most celebrated conductors; Zubin Mehta, Ivor Bolton, Cornelius Mayer, and Bertrand de Billy have phrased his leading and musical performance.

As a chamber musician, Benjamin has performed across Europe, the United States, and Asia. He has collaborated with today’s most inspiring musicians, including Christian Tetzlaff and Midori.

Originally from the French Basque Country, Benjamin graduated from the Paris CNSM with Jean Sulem and the New England Conservatory in Boston, with Kim Kashkashian. He also holds a Musicology degree from the Sorbonne University. Benjamin participated in his first international competition at the age of 16 and won both 1st and special prizes in the Llanes International String Competition. Two years later, he transcribed Schubert’s “Winterreise” for viola, harp, and narrator, which was released by an E-label. In 2015, Benjamin released his first solo CD “Les voix de l’alto.” His most recent project is the arrangement of Janacek’s masterpiece “The Cunning Little Vixen” for viola, piano, and narrator into an innovative form of “musical tale,” a work funded by the French Ministry of Culture.

To share music with those who have difficulty accessing it, Benjamin is engaging in various activities worldwide, for instance, in France at primary schools with Créations en Cours, and in India and Japan in rural areas and children hospitals with ICEP/ Music Sharing.

As an orchestra mentor and private teacher, Benjamin enjoys teaching and help the students improve. He believes that an extraordinary teacher is, more than the one who infuses knowledge, the one that provokes the students’ will and capacity to develop by themselves.

I use Zoom, Google Meets, or Skype to conduct our lessons.